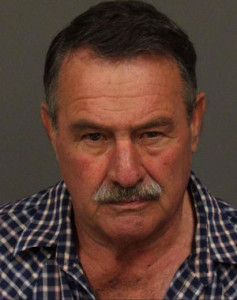 Bruce Franklin Valentine, 70, was arrested for the Halloween-masked armed bank robbery of the Rabobank in Cambria that occurred Nov. 7. Valentine is a former Santa Barbara County Sheriff’s deputy who served from 1968 to 1977 before leaving on a non-service related disability reasons, according to media reports.

Detectives with the sheriff’s office and investigators with the San Luis Obispo County District Attorney’s office served a search warrant at a home in the 4700 block of Egret Lane in Heritage Ranch outside of Paso Robles where they arrested him.

Valentine was taken into custody at 8:50 a.m. without incident and transported to the County Jail. Valentine became a suspect as detectives followed up on leads gained during the initial investigation of the robbery. The investigation is continuing.

This entry was posted in Uncategorized. Bookmark the permalink.